The semi-automatic Draco® filter press features a hydraulic system for closing the filter package, which is controlled by a joystick, and is also equipped with an air circuit for sludge purge, safety systems, drainage chute and flange connections. 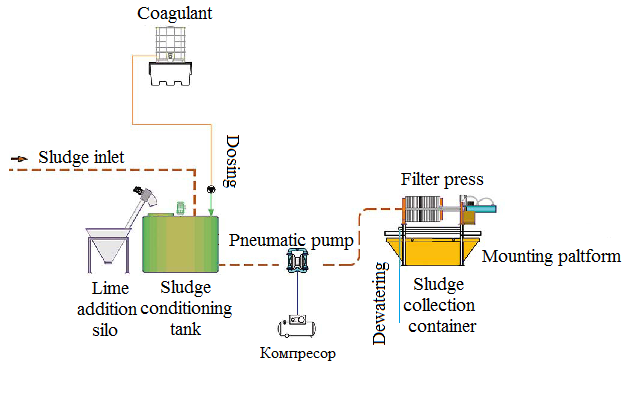 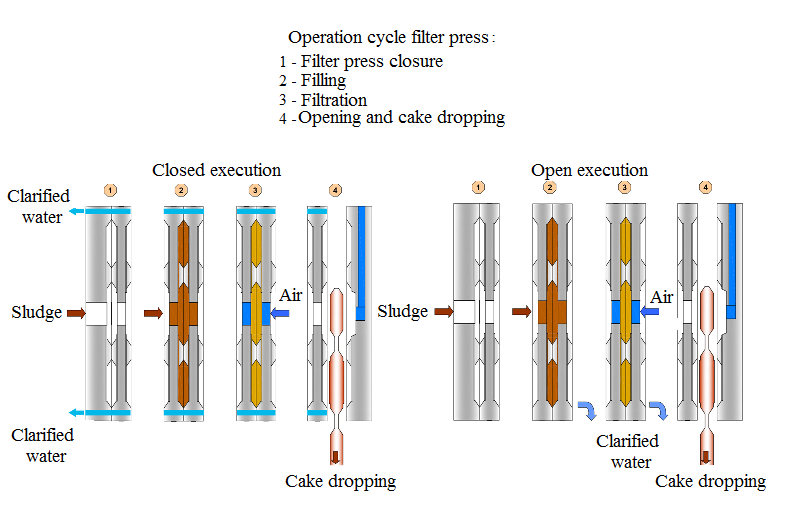 1. Closing: The process begins with closing the filter press. The movable plate is driven by the pressure created by the pump after moving the lever.

2. Filling: The pumping of the filter sludge to the press begins, the chambers are filled, the solid particles remain on the surface of the sheets while the liquid passes and flows through the drainage system. Initially, the filtration pressure is minimal but increases with an increasing number of retained particles.

3. Filtration: The maximum filtration pressure is reached and maintained until the supply of the feed pump is stopped, thus achieving an appropriate level of dehydration of the plates. The compressed air valve is then opened to clean the central duct and remove any remaining sludge.

4. Opening: After the final dewatering, the filter block is opened when the lever is moved and the moulded cake is separated from the plates.

The manual filter press is the simplest model in the Draco® range, it has a pump with a manual lever to control the system for opening and closing the filter package, an air circuit for blowing sludge, a drainage chute, side protection plates and flange connections.

The automatic filter press is the most advanced model in the Draco® range, which performs the full cycle of sludge dewatering automatically. The model is equipped with a hydraulic group, air circuit for blowing sludge, safety systems, shaking the shaft to help sludge fall out, drainage chute, emergency stop and flange connections.

The TAF® sludge conditioning tank is made in a cylindrical shape of fibreglass-reinforced polyester, equipped with a mixer, systems for measuring minimum (prevents operation of the mixer in the absence of sludge) and maximum (prevents overflow of sludge) level and measuring tape which allows visual control of the content. The process taking place in the […]